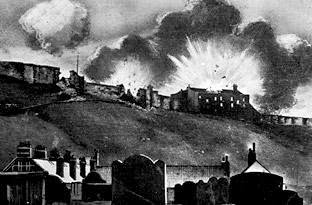 BBC Local News:  "The time was eight o'clock, the day was Wednesday 16th December 1914, and far removed from the battlefields of the Western Front death had come calling on the defenceless seaside town of Scarborough! That fateful morning 18 people fell victim to the German attack."


From Smudge's Story: "At about 7.00 a.m. we went to ‘action stations’.  Seawards there had been spotted three German battle cruisers.  But then what could we have done against such odds?  Their twelve inch guns against our twelve pounders.  But as they neared the coast we were ordered by the commander in chief to retire from any action, no doubt our battle fleet were closing in on them, but we were between them and land.  The Germans went full speed and opened fire on the towns of Scarborough , Hartlepool and Whitby but they did not stay for long.  They were scared, I suppose, of what would happen once we knew of their presence.  One of my division’s destroyers was sprayed with shrapnel resulting in a couple of lads killed and several other casualties.  So, we were ordered to our base, while the big chase went on."