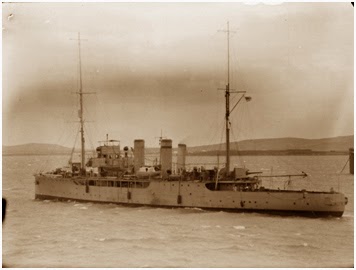 As the night neared its end and dawn broke, two of us volunteered to brew some tea, as a refresher.  It took two men.  With the daylight, we left our mess, went on deck, and dodged the seas that were coming inboard.  Some of the waves seemed thirty feet above our bows as Jessie plunged and lifted her nose high and then, with an almighty “swish”, the sea would surge along her main deck.  Out of breath, we arrived in the galley and brewed up.  Then, lashing the teapot lid on tight, we now had to return to the lads, whilst hoping the salt water did not get in and mix with the tea.  We arrived back at the hatchway, soaked but safe.  While I held the teapot, the second man held me as we descended the companion ladder, which was quite a feat.  We hung the teapot from a swinging hook and poured our tea into basins.  You need an acquired skill to drink from a basin in these conditions without upsetting it down your chest.  But the tea helped to relieve our tension.  I was on watch at eight bells, or 8.00 a.m., so I had some biscuits and corned beef, and went on duty.
Posted by Graham at 01:04 2 comments: 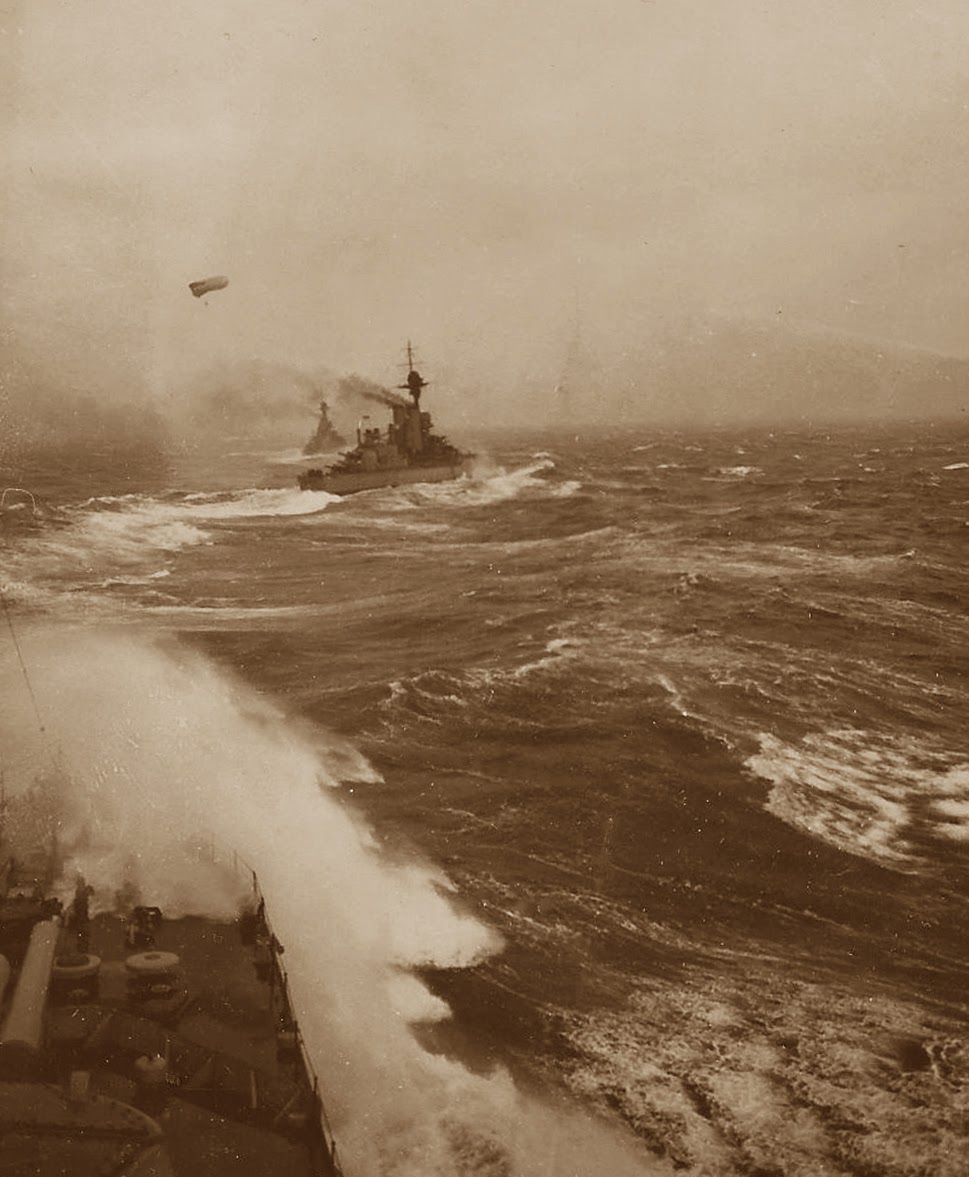 "The whole fleet was ordered to sea and we all proceeded to Scapa Flow to join the Northern Fleet. This armada put to sea in battle array, a really impressive sight to see, over forty battleships together with an American squadron of thirty fast, light cruisers and flotillas of destroyers and submarines. We were on a large scale manoeuvre in the direction of the German coast. Each flagship had an observation balloon with lookouts. I was wondering why we were all out, was there a big battle imminent?"

Odessa in the Ukraine 7th February 1921 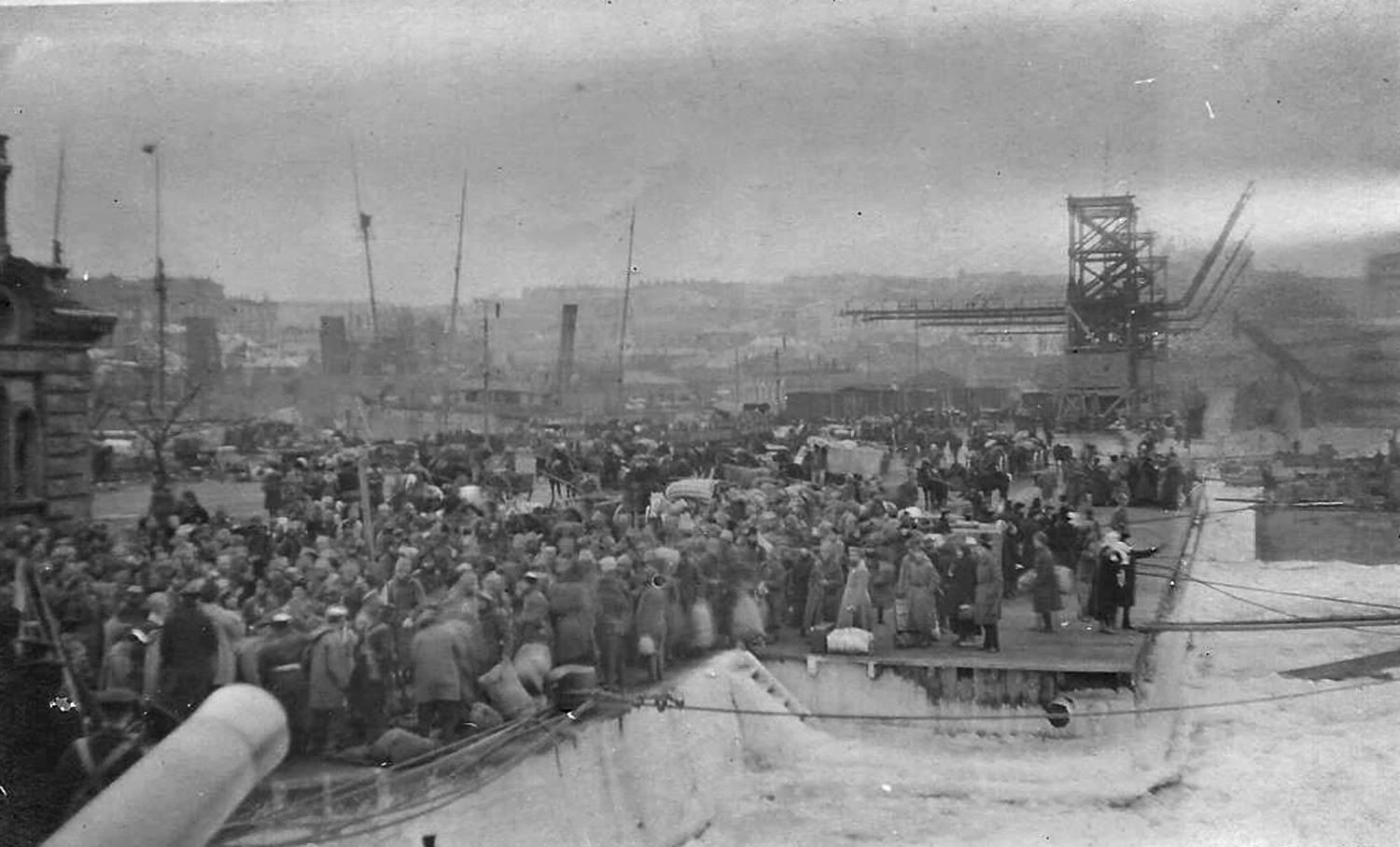 "Unfortunately, the bombardment did not stop the Red Army which was now advancing into Odessa in force.  News of this now started off a real panic on shore, where mass hysteria was only too evident as the poor devils hoped against hope for rescue.
Our captain (H.M.S. Ceres) was in a real dilemma - knowing full well we could not take any more.  Fighting took place on the jetty. We had to pull up the gangways and threaten to fire.  Some women got on the ice pleading for help – oh - it’s awful to feel so powerless and I know our captain was overcome with emotion."

Captain V H Haggard of H.M.S. Ajax wrote that, “On the 7th Feb, things began to look so bad that I ordered the transports to leave at once and requested Colonel Walshe to come aboard the Ceres with the Mission. They eventually arrived in good order with no casualties except for Captain Macpherson, who was dangerously wounded. Ajax fired high shrapnel over the suburbs, which contained the more Bolshevik element of the city... The Mission and cadet forces, which had held the approaches to the city, were embarked aboard the Ceres which I then ordered to leave the city". : ADM 137/1756
Posted by Graham at 08:53 No comments:

Smudge on the Web

From the poverty of London’s East End to the Royal Navy, “Smudge’s Story” tells of the early life of Fred Smith. In his own words, Fred tells of his part in the battle against First World War U-boats, of life as a stoker in a tiny ship tossed by huge Atlantic waves, and of the terrified faces of those he rescued from icy seas.  Fred describes his fears, his joys and his growing love for his sweetheart back home.

He tells of Sinn Fein riots, the freezing Baltic, the sweltering Mediterranean, the Black Sea and of war and revolution. Fred and his shipmates encounter snipers, wild dogs and desperate women; and witness thousands fleeing the advancing Red Army in Odessa, where their ship is helplessly locked in ice.
How does a ship’s stoker, an ordinary man, cope in such epic times of death and suffering?

Unread for many years in the attic, this story is now brought to life. Edited and published by his family, it presents a unique and fascinating account of the worst of times in our country’s history.
Posted by Graham at 09:08 No comments: